About Princess Marie-Chantal Of Greece

Born in London, one of three sisters, she spent her early years in Hong Kong. At the age of nine, she went off to Le Rosey, a Swiss boarding school, followed by Ecole Active Bilingue in Paris. But no matter where she was, she always found a great passion and aptitude for art and design. This led her to New York City, where she studied both fields, at New York Academy of Arts and New York University. Whilst in New Orleans, she met Crown Prince Pavlos of Greece. They fell in love & were married in 1995 in the Greek Orthodox Cathedral of Saint Sophia in London.

One year later she became pregnant with her first child, Maria-Olympia who was born in New York, followed by Constantine Alexios (1998), Achileas-Andreas (2000), and Odysseas Kimon (2004). In June 2008 they welcomed another new addition to their lives, a beautiful baby boy named Aristide.

Starting the children’s collection in the year 2000 sprang naturally from her love of classic, timeless design, and the fundamental love of children. Her memories of her own childhood—and her mother’s influence on her are vivid. Her mother always brought them up to look their best. They were dressed in very specific outfits, like Liberty-print smocked dresses made of lightweight Tana lawn cotton.

Her favourite time of year was the summer, mostly because her sisters & Marie-Chantal could wear free, happy, and comfortable outfits, the very elements she wanted to bring to today’s generation of children’s clothing. 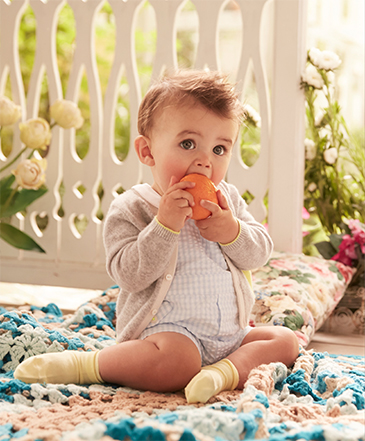 Join our world to hear about new collections, offers, events and editorial.